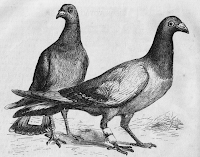 Great Barrier Island is the largest island in the Hauraki Gulf, laying only 65 miles (105Km) from Auckland City. The island can be seen from Auckland on a clear day, it is that close, but back in the 1800s, it was isolated with no communication other than by sea with an irregular ship service. When in 1894, the Northern Steamship Company's ship SS Wairarapa hit the northern end of the island with the loss of 121 lives, the news took several days to reach Auckland. It highlighted the need for better communication between the island and the mainland. See our post Wreck of the Wairarapa.
The Great Barrier Pigeongram Agency was created in early 1897 with a purpose of providing a mail service using pigeons. The letters carried, known as flimsies, were written on extremely lightweight paper. A few months later, on 14th May 1897, a rival pigeon mail service was established under the name of The Original Great Barrier Pigeongram Service. The two companies, commonly known as the 'Agency' and the 'Service', would continue competing with each other until 1908 when a telephone cable was laid between the island and the mainland.
Quickly, both companies began issuing stamps. These stamps are not considered official postage stamps because they were issued by private companies, therefore they are not usually listed in catalogues of New Zealand Stamps. We would probably know them as 'Local Post' but back then they were just 'private stamps.' Even though, being the first known airmail stamps they are of interest to many collectors. They are very rare, particularly attached to a flimsy, only a few copies of this are known to exist.

The 'Service' was the first to produce stamps. They were printed in Auckland by the Observer Printing Works, first being used on 19th November 1898. The design was printed with blue ink on thin white gummed paper. The words Great Barrier Island - Special Post were inscribed on ornamental ribbons across a background image showing a pigeon carrying a letter.

Being a rather simple design, there are a number of forgery stamps produced for this stamp but they can usually be identified by a few simple checks. On the stamp above to the left look closely at the words "ONE SHILLING" on the right side of the stamp. You will notice that the word "ONE" appears as ONF" On the stamp to the right look closely at the word "POST" in the centre of the design. When you compare it with a good example above you will notice the dot missing at the end of the word.

To overcome this problem of forgeries, a new design was first issued in March 1899. It still carried the words GREAT BARRIER ISLAND / SPECIAL POST and the pigeon carrying the letter, but it was a lot more elaborate design. Of course, the face value was still one shilling too.
A new problem arose when the New Zealand Postal Administration objected to the word "post." They said it might be confused with standard postage stamps. In June 1899 the remaining stamps were overprinted with the word "Pigeongram" which completely covered the words "Pigeon Post."
This led to a redesign in August 1899 when the stamp was reissued with the same design, same value and same colour but with the words "Special Post being replaced with the words "Pigeon Gram."

Marotiri Island is part of the Hen and Chicken Islands, a group of smaller islands located north/east of Auckland. The management of Marotiri Island Copper Mines took an interest in pigeon mail and asked to be included in the scheme. In August 1899 240 Great Barrier stamps were returned to the printer to be overprinted a second time. This time with the word "MAROTIRI" printed over the words "Great Barrier."
The following month a new stamp was issued for this new service. It was an attractive design, printed in carmine red, with a pigeon carrying a letter in the centre surrounded by the words "MAROTIRI ISLAND / PIGEONGRAM / COPPER MINES." 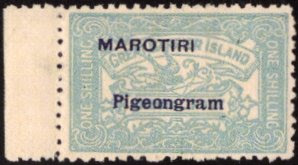 Another example of the overprint showing the poor perforations of these stamps.
On the lower edge, the paper looks to have been ripped.
1899 New Zealand Great Barrier Pigeongram Agency.
In July 1899 the "Agency" began issuing pre-paid Stamps. Since there was intense competition between the two companies they decided to reduce the mail rate from Great Barrier Island to Auckland to six pence. Because of problems involved in training birds on the island postage to Great Barrier remained at one shilling.
Therefore two stamps were required, with the values of 6d printed in blue and 1/- in carmine red. They are, in my opinion. the most attractive of the pigeon post stamps, being a triangular design with a flying pigeon in the centre. Around the three sides were the words "GREAT BARRIER ISLD / PIGEON - GRAM /  AUCKLAND." The value occupied the upper corner with the letter 'N' 'Z' in the two lower corners.

There is an interesting variety/forgery in the larger value where the common form of one shilling 1/- was replaced with 1s. I am unsure if this was an early proof released by mistake or an actual forgery by someone overseas (USA) who didn't know the correct way writing One Shilling. I have seen catalogues and reference books presenting both ideas. Campbell Paterson talks about the only example of this being perforated while the example I have below appears to be imperforated. 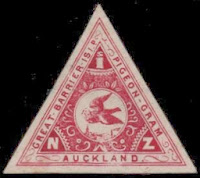 Some other forgeries can be found on our page Forgeries.

Below are two printing errors in the "Agency" stamps. In the first example is a joined pair of the 1/- which is imperforated. In the second example is the lower value with clear off-set on the back. notice how the off-set ink image appears to be out of line with the shape of the stamp. This is very unusual as normally during printing the sheets land in line one on top of the other. 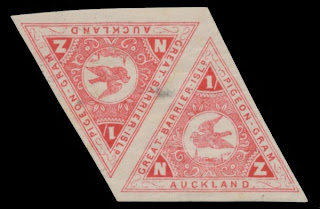 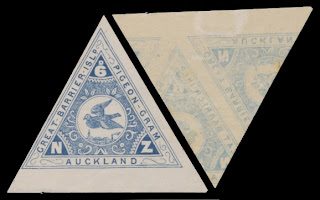 Flimsy.
The letters carried by the pigeons were written or typed on very light weight paper, so they became known as flimsies. A stamp found attached to a flimsy is now, of course, worth a lot more that just by its self. The stamps issued were only for the purchase of the services of the issuing company. The flimsy was carried via pigeon to Auckland where they would be either delivered locally or placed in envelopes for delivery further afield. The extra postage required would have been charged to the sender on the island.
Here are a few examples. 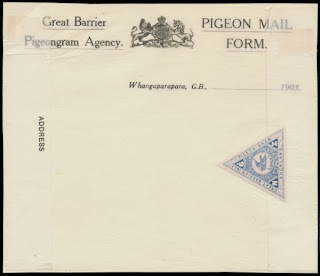 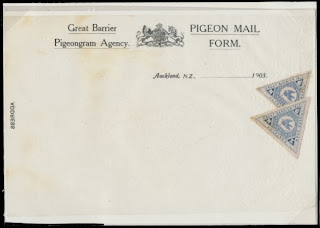 These two blank (unused), covers were for sending via the 'Agency' hence the triangular stamps.
The left one sent from Great Barrier Island to the mainland as the service costs 6d while the right cover is going from the Mainland to the island with a cost of 1/-. Notice that in this case 2 blue 6d stamps were used instead of a 1/- red stamp.

Our next example was sent from Great Barrier Island to the Mainland via the 'Service'. From what I can read it was sent in July but the year is hard to read, possibly 1900. The cover is addressed to 84 Hobson Street in Auckland.
﻿ 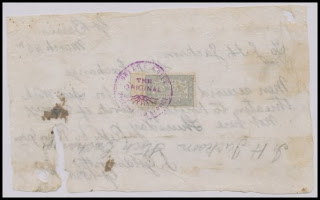 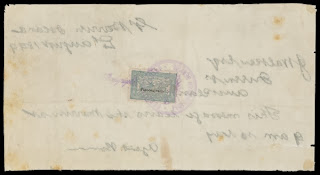 These two covers were also sent via the 'Service.' Both covers are placed upside here so the stamps and postmarks can be better viewed. The cover on the left is faded and not much detail can be seen other than it was sent from Great Barrier Island on 26th March. (Unable to establish what year that was.) On the second cover on the right, much more information can be seen. It was sent from Great Barrier Island at 9 am on 4th August 1899. It was addressed to someone in Queens Street, Auckland.

Below is the inside of a flimsy showing the 'Service' letterhead and customer's message. I've personally never seen one of these before and was surprised nearly a third of the paper is taken up with the company letterhead and advertising.
Notice the various places served by this company:- Great Barrier Island, Marotiri Copper Syndicate, Whitford, Waiheke, Port Charles. If you look closely you can see that even the two birds in the illustration top centre are named. 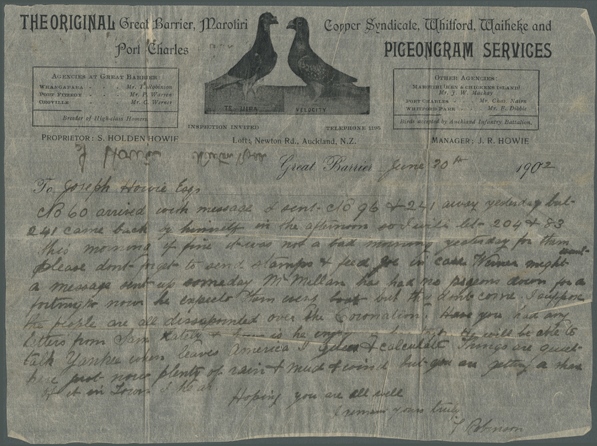 Cancels.
Here are some cancels used by the Pigeongram Service. 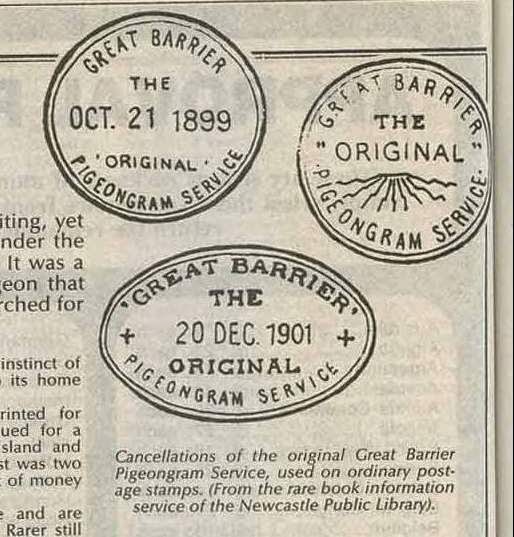 These are the three cancels known to have been used by the 'Service'. 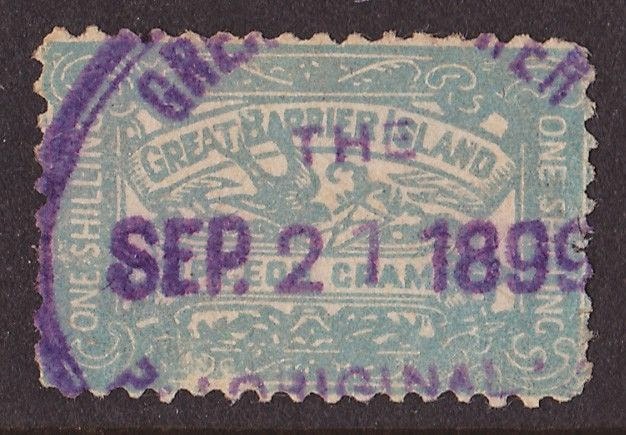 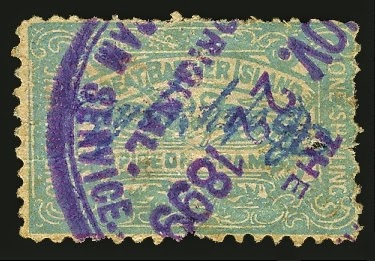 Here are two examples of the 1899 circle cancel stamp, seen on the top left in the group above. The first is from September 1899 and the second one is a couple of months later, in Nov 1899.
(The second circle cancel of the 'Service' can be seen on one of the flimsy covers above) 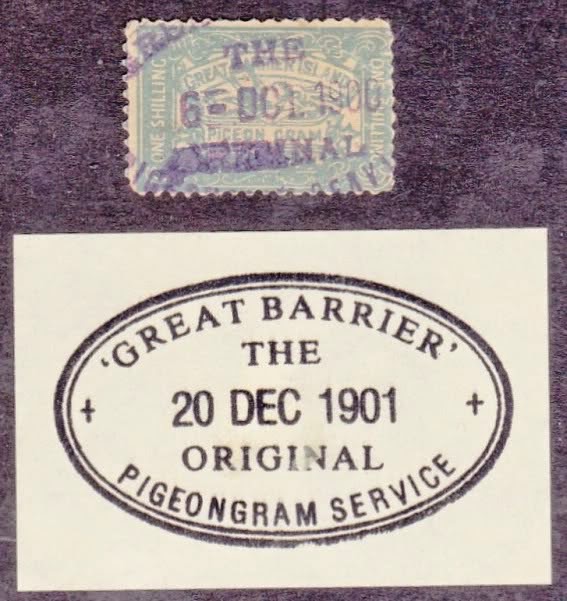 By 1901 the hand-cancel had changed to an elliptical stamp.
An example on flimsy below. It is very hard to get such a good full cancel like this. 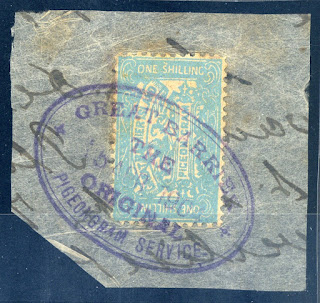 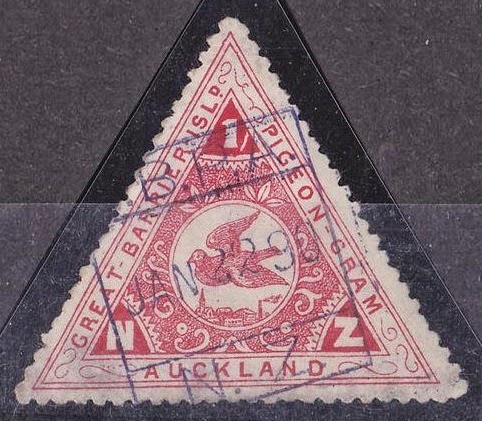 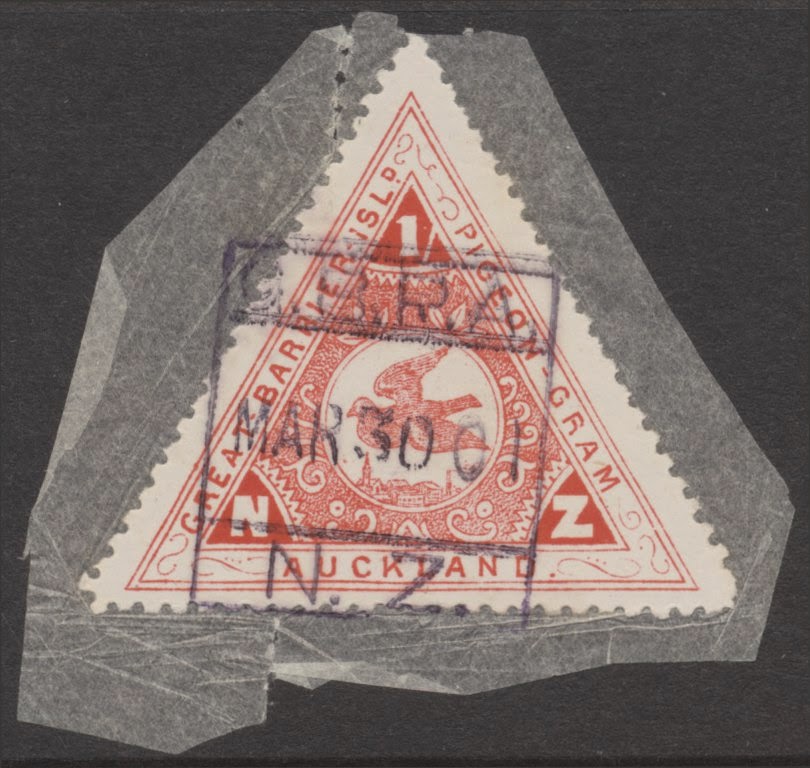 The Agency used a square cancel with the letters 'G.B.P.A.' (Great Barrier Pigeongram Agency) at the top. The date was located in a central panel, and the letters 'N.Z.' (New Zealand) found at the bottom. These are three examples from the early 1900s with one still being attached to the flimsy paper it was sent on. 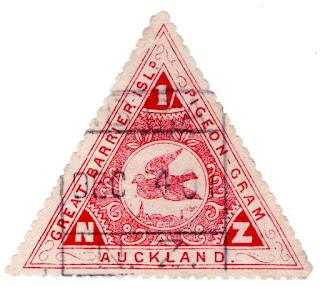 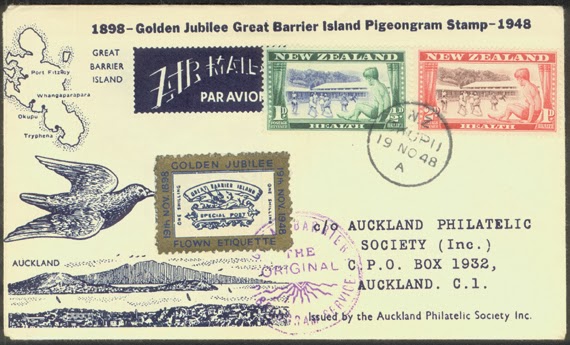 In 1948 the Auckland Philatelic Society marked the Golden Jubilee of the Great Barrier Island Pigeongram Stamp.  What I like about this particular cover is that there is a lot going on. Down in the bottom left is a view of Auckland city with Rangitoto Island in the background. In the top left is a map of Great Barrier Island. The cover featured a pigeon which appears to be holding a copy of the original pigeon post stamp surrounded by a gold boarder. This stamp was cancelled with a copy of an original cancellation strike. In the example above the two stamps issued for the 1948 Health Issue were attached to pay postage via NZ Postal Services.  Notice the post mark on these is from the Okupu Post office on Great Barrier Island. Also included on the cover is an airmail sticker. 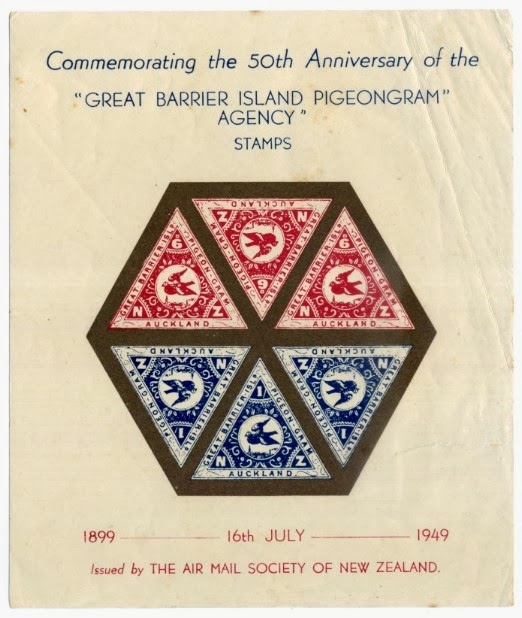 1949 marked 50 year Anniversary of the Great Barrier Island Pigeongram Agency. The Air Mail Society of New Zealand issued a miniature sheet depicting the two triangular stamps. Notice that the colours have actually been reversed so these stamps would not be passed off as the original ones.
One 1/- stamp is used on this cover below with a post strike created by the Air Mail Society. The cover was sent to Christchurch via NZ Postal Services using two stamps from the King George VI definitives. Like the cover above it was cancelled at the Okupu Post office on Great Barrier Island. 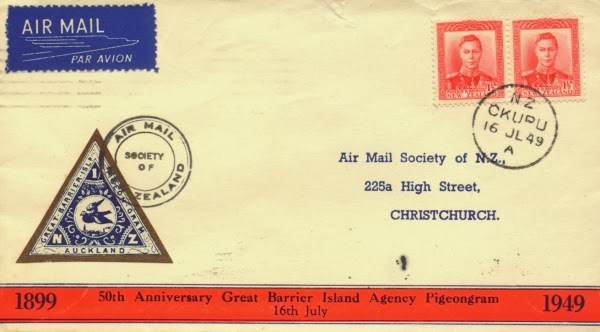 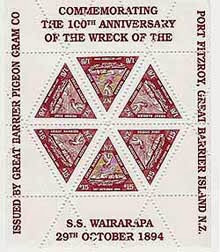 On the 29th October 1894, the SS Wairarapa became wrecked on the northern end of Great Barrier Island. This miniature sheet was issued 100 years later in 1994. It was not valid for normal postal use being mainly as a collector's item.
See our post Wreck of the Wairarapa

In 1997 NZ Post issued two stamps to mark the centenary of the pigeon post service from Great Barrier Island. The stamps featured the original triangular design updated to reflect the centenary with decimal values of 40c on the carmine stamp and 80c on the blue stamp. The stamps were sold singularly or in sheets of 50 arranged as is shown below. The miniature sheets, which can be seen lower down, contained 4 stamps - 2 of each value.

Plate Blocks of each value from sheets of 50 stamps.
Pigeon Post Centenary Exhibitions.
The 1997 Pigeon Post Triangular Stamp design was featured in two miniature sheets for Stamp Exhibitions which NZ Post attended that year. The stamps were the same as those shown above but now four were arranged in the form of a triangle. 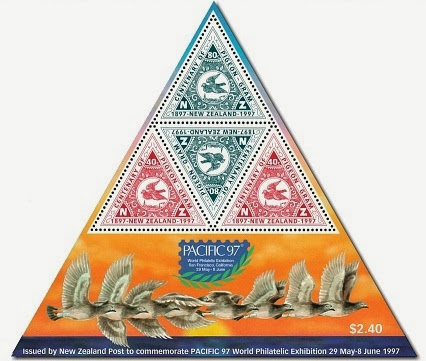 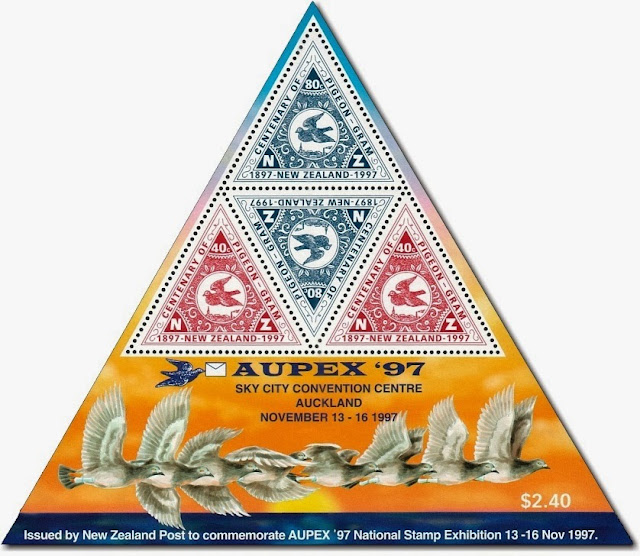 Issued to commemorate Aupex '97 National Stamp Exhibition, Sky City Convention Centre, Auckland, 13 - 16 November 1997.
Below is a used example of the same miniature sheet. Notice the post cancel is a pigeon carrying a letter. A similar theme to the early Pigeon Post stamps. 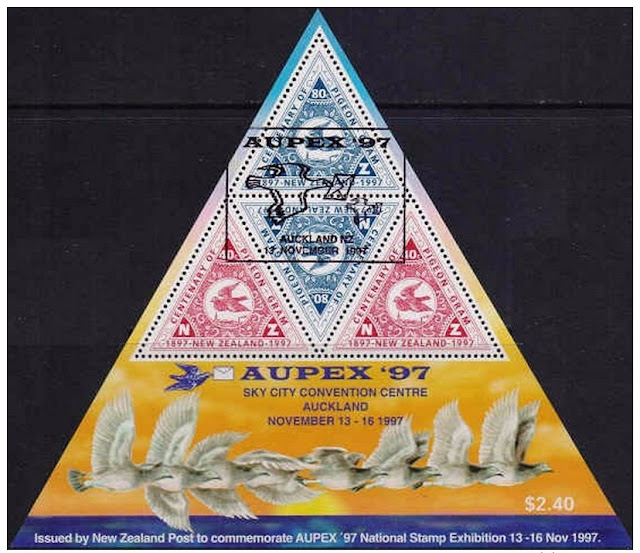 If you have any questions or comments please contact via the comment section below.
Just state "Do Not Publish" if you don't wish your comment to be published.