This post is the first of a big project for me, a series on the stamps of Antarctica and the Ross Dependency. As we publish each post copies of their stamps will appear in our Antarctic Collection seen in links above. 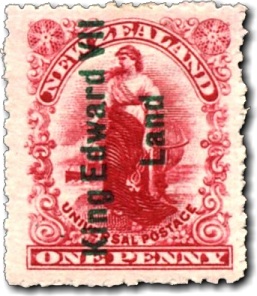 During the early 1900s two expeditions left New Zealand heading for the Antarctic. Each was provided with stamps especially overprinted for their expeditions. The purpose of this post is to cover these two early issues that are usually included in a collection of Ross Dependency Stamps.


1908 - King Edward VII Land.
The Expedition.
The British Antarctic Expedition 1907–09, otherwise known as the Nimrod Expedition, was the first of three expeditions to the Antarctic led by Ernest Shackleton. Its main target, among a range of geographical and scientific objectives, was to be first to the South Pole. This was not attained, but the expedition's southern march reached a Farthest South latitude of 88° 23' S, only 97.5 nautical miles (180.6 km; 112.2 mi) from the pole. This was by far the longest southern polar journey to that date and a record convergence on either Pole. A separate group led by Welsh Australian geology professor Edgeworth David reached the estimated location of the South Magnetic Pole, and the expedition also achieved the first ascent of Mount Erebus, Antarctica's second highest volcano.

Postage & Stamps.
Before leaving New Zealand on the 1908 British Antarctic Expedition, Captain Ernest Shackleton was appointed as a New Zealand Postmaster, and provided with 23,492 New Zealand “Penny Universal” stamps, overprinted “King Edward VII Land”, for use on the expedition.
Postmaster Shackleton was provided with a circular date stamp, “BRIT. ANTARCTIC EXPD.”, with “N.Z.”, and time, date, year on four lines in the centre, which was used to postmark mail from the continent. Due to ice conditions, Shackleton was unable to reach King Edward VII Land, and established his base in McMurdo Sound which is why these stamps are often thought of as being forerunner Ross Dependency stamps. 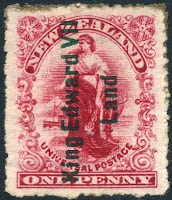 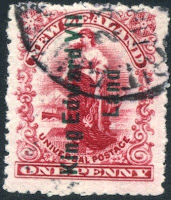 This stamp shows the overprint of the New Zealand 1901 1d Universal for the Shackleton Expedition to Antarctica. The used copy appears to show the correct date stamp as used by Postmaster Shackleton. 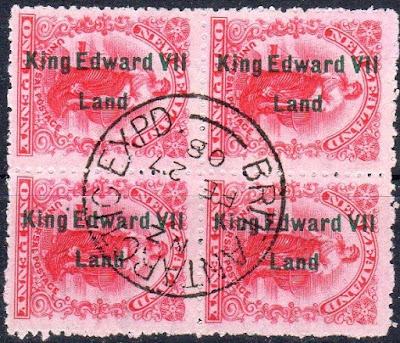 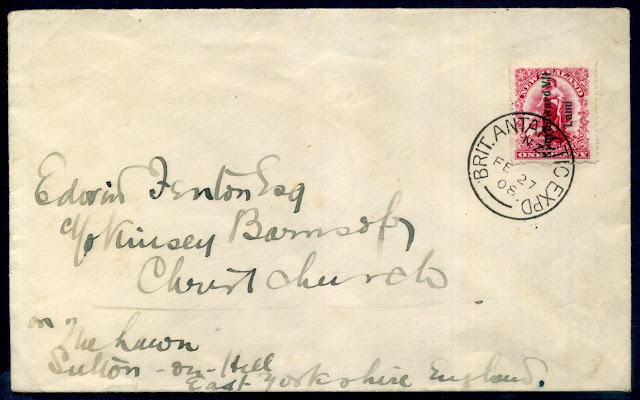 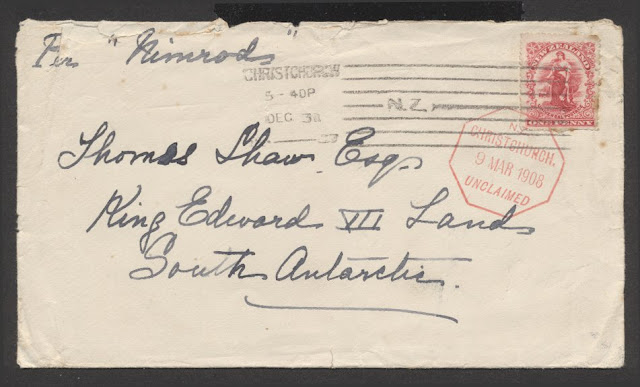 Another 1908 King Edwardland Antarctica cover, showing the New Zealand 1d Universal. The cover was sent from Christchurch 31/12/1908, cover endorsed per Nimrod, Unclaimed Christchurch marking on front 9/3/1908, backstamped Lyttleton 31/12/1907 plus British Antarctic Expd cancel 3/2/1908. Did it actually get to the Ice? 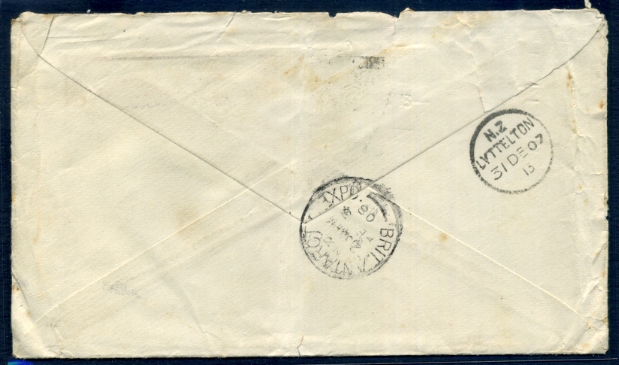 1910 - Victoria Land.
The Expedition.
The Terra Nova Expedition, officially the British Antarctic Expedition, was an expedition to Antarctica which took place between 1910 and 1913. It was led by Robert Falcon Scott and had various scientific and geographical objectives. Scott wished to continue the scientific work that he had begun when leading the Discovery Expedition to the Antarctic in 1901–04. He also wanted to be the first to reach the geographic South Pole. He and four companions attained the pole on 17 January 1912, where they found that the Norwegian team led by Roald Amundsen had preceded them by 34 days. Scott's entire party died on the return journey from the pole; some of their bodies, journals, and photographs were found by a search party eight months later.
The expedition, named after its supply ship, was a private venture, financed by public contributions augmented by a government grant. It had further backing from the Admiralty, which released experienced seamen to the expedition, and from the Royal Geographical Society. The expedition's team of scientists carried out a comprehensive scientific program, while other parties explored Victoria Land and the Western Mountains. An attempted landing and exploration of King Edward VII Land was unsuccessful. A journey to Cape Crozier in June and July 1911 was the first extended sledging journey in the depths of the Antarctic winter.

Postage & Stamps.
Before leaving New Zealand on the Terra Nova Expedition in 1910, Captain Robert Falcon Scott was appointed as a Postmaster. 24,000 New Zealand “Penny Dominion” stamps (200 sheets) were overprinted “VICTORIA LAND.”, of which 23,171 were carried by Postmaster Scott on the expedition. 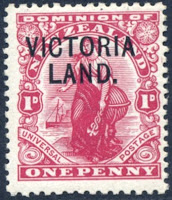 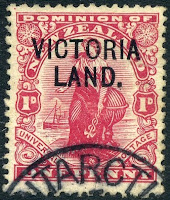 The 1909 Dominion overprinted for the Scott Expedition to Antarctica.

During 1912, an additional 2,400 Edward VII ½d stamps were overprinted, and 1,940 of these were carried aboard the Terra Nova when it returned to Antarctica in the 1912-13 summer season. 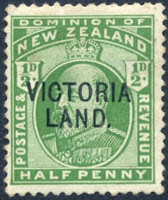 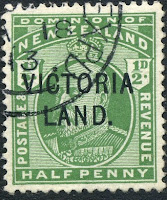 Good copies of this stamp, particularly in genuine used condition are very hard to come by as only 2,400 were overprinted. Over the years many forgeries have been discovered. Therefore anyone collecting them must take great care to ensure they have a genuine copy. 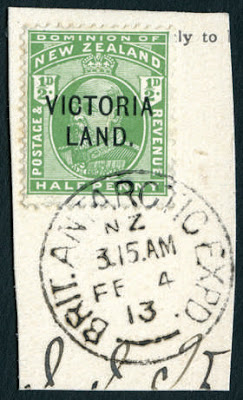 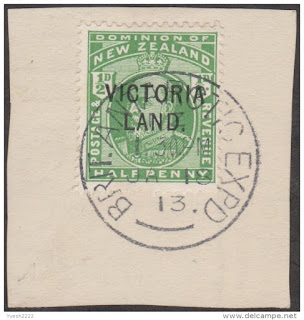 Two ½d Victoria Land stamps with cancels from the Terra Nova Expedition, officially the British Antarctic Expedition as shown on the cancel text. 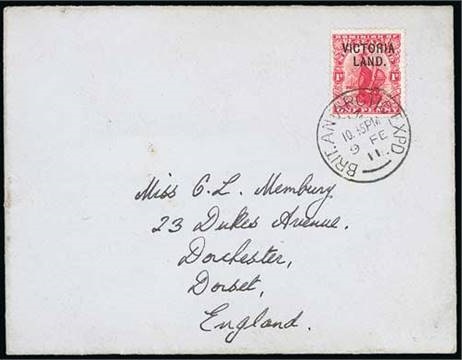 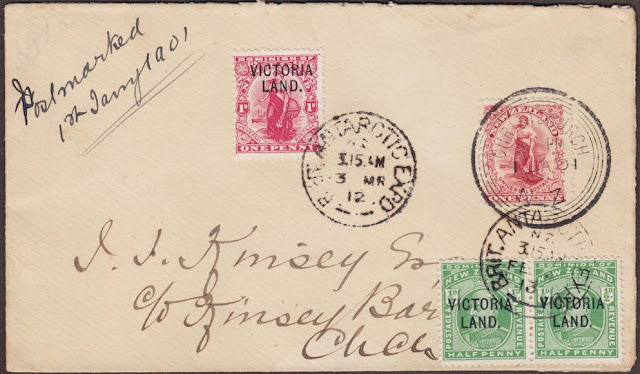 A March 1912 expedition cover, posted in Antarctica and sent to Christchurch in New Zealand.
Notice how this cover cost 2d to get it to New Zealand while the first cover only carried 1d postage. A New Zealand 1d Dominion was also added to the cover and cancelled in Christchurch to provide local NZ postage.
(That incorrect "Postmarked 12th January 1901" appears to have been added at a later date by a collector. 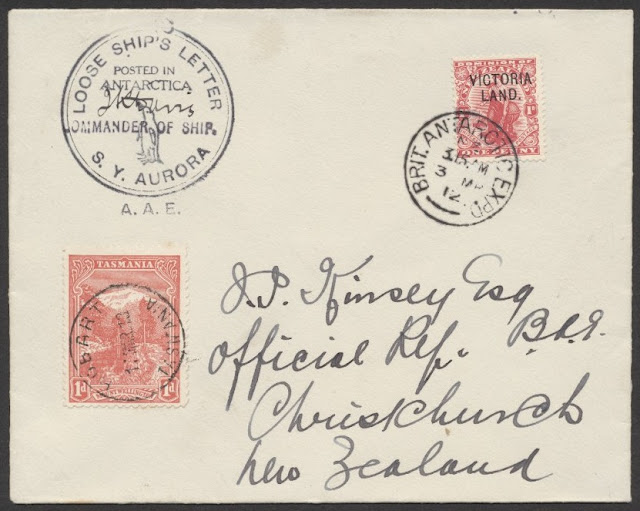 Victoria Land 1d Dominion posted on Twin Expedition cover being sent to Kinsey in Christchurch 3/3/1912. The cover was sent the ship S Y Aurora with a Loose Ship Letter cancel seen in the top left. Finally there is a 1d Tasmania stamp with cancel to provide passage from there to New Zealand. 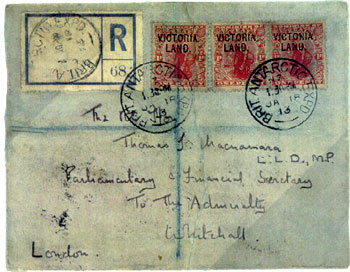 Now this is a very poor example. A registered cover being sent to London January, 1913. It appears to have been water damaged in some way. The only reason why we would include such a poor image is the fact that this appears to have been official correspondence between the Expedition Leaders and the Admiralty in London. 3 1d Victoria Land stamps were used and cancelled in Antarctica.


Some of the images in this post were used with permission from the illustrated catalogue of StampsNZ
You can visit their web site and On-line Catalogue at, http://stampsnz.com/